The value of having your say...in 280 characters | Blue Sky

Home » Blogs » The value of having your say…in 280 characters


The value of having your say…in 280 characters

We’ve all been there

– something, be it a service or product that we pay for and use regularly has not met our expectations.

So instead of sitting on the phone for an hour, trying in vain to find out where the parcel you ordered three weeks ago has gone, you immediately take to Twitter to voice your displeasure.

On the other hand, after forcing yourself to go buy a new laptop (because your current one is sure to give up any minute) and interacting with a salesman who understood exactly what you needed, you write a glowing message to the company on Twitter because you are so impressed.

It goes both ways.

So why do we suddenly prefer using social media as a primary means of communication with big businesses?

Alongside the considerable ease of access, going directly to Twitter avoids actually having to speak to another human being – something my generation avoids like the plague.

A poll back in 2012 by Fishburn Hedges and Echo Research reflects this. Of 2,000 people surveyed, 36% used social media to contact a large company, compared to 18% who would call. Similarly, 65% said it was a better method of contact than calling.

Their evidence also suggests it’s not just those aged 25 and under who would rather not speak to another person – the study also revealed that 27% of people aged 55+ would rather use social channels. It is likely these numbers are higher today – but the study remains relevant nonetheless.

What does this mean for your business?

From our perspective, engaging with your customer base on Twitter or Facebook provides another opportunity to add value – and to showcase enhanced user experience on a more public platform. Adding value is a process that works both ways.

If you are not bringing value to a customer in every sales or service interaction, then the customer is unlikely to bring value to your business. To highlight this, a study carried out by Twitter in 2016 that focused on the value of engaging with customers in the Telco’s sector, showed that a simple acknowledgement of an enquiry results in a 10% increase in revenue potential per transaction –the customer is more likely to remain your customer and, are willing to pay more, if they feel valued.

To summarise, it’s easy to see how adding value benefits your customer and your business. Although not without its problems, Twitter presents the perfect opportunity to engage and build rapport with your customers, whatever the nature of the conversation.

Personal touches have a considerable impact – take this exchange between a customer and a service agent at Argos who responded to a tweet in the same style it was written in: 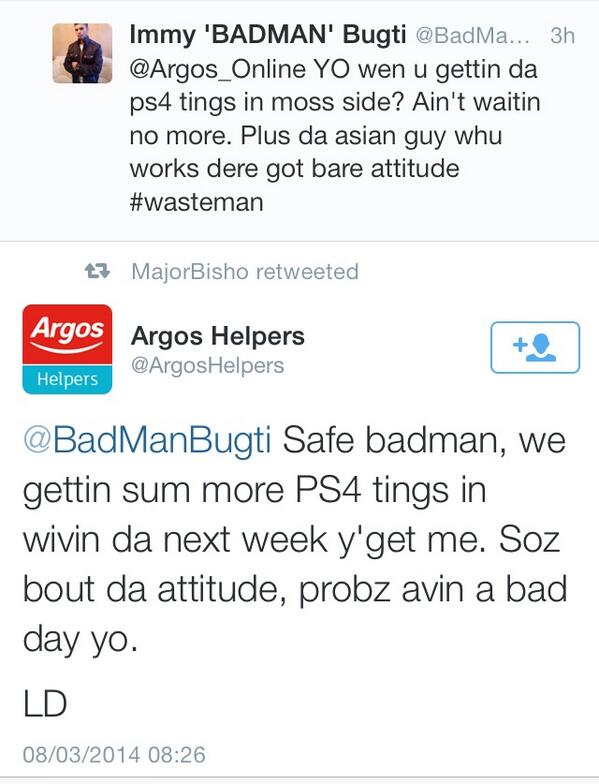 Within a few hours, the response had been retweeted over 1,500 times – although in this example the line between being funny or personal, and coming across as obnoxious or insulting, is thin.

From a personal standpoint, I am more likely to head onto Twitter to get in contact with customer service teams because it’s easier.

Similarly, I am more likely to go online after an interaction than I am to contact the company directly (unless the service has been truly diabolical) because the outcome is likely to be more satisfactory than if I speak to someone directly.

More and more businesses are acknowledging the importance of engaging with their customers on social media and we’re working with clients who are keen to know just how to make these interactions as valuable as every other channel.